Arts By the River project 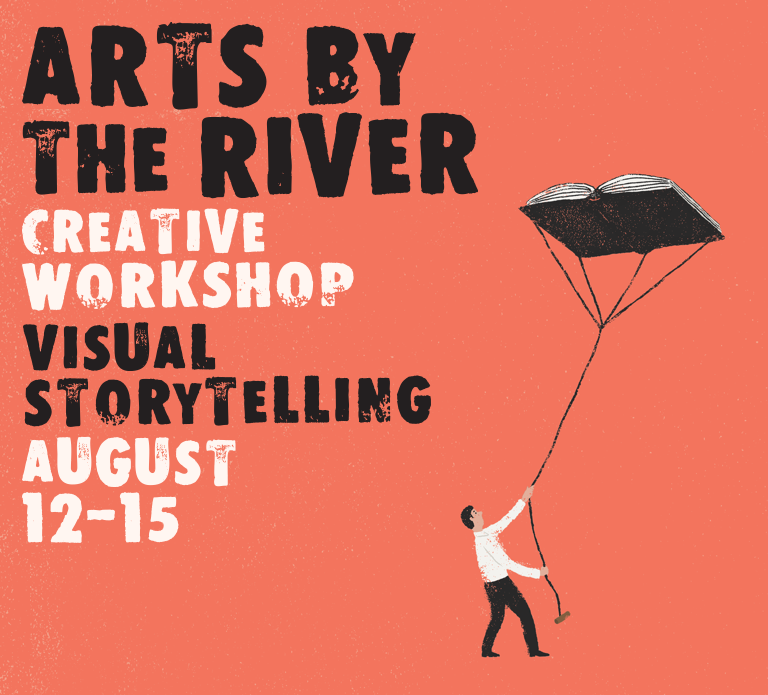 The Arts by the River project is organized by the Library of Anykščiai and reading promotion program Children’s World. It offers a space for children and YA book authors to engage in creative exploration of various topics related to the field of children and YA literature. It also provides a platform for networking and reaching out to new audiences. The project organizes ceative workshops, residences, and other international events, which are held just before the Children’s and YA literature festival “Adventures in the Wild”.

Project events are held in the unofficial Lithuanian capital of literature, Anykščiai, which is the birth-place of some of the most important Lithuanian classical writers and is also famous for its picturesque nature setting, featuring the incredible Treetop Walking Path, and relaxed health resort atmosphere.

The venue of the workshop is a newly opened Manor of Stories, a literature
education center providing various creative and educational services both to the general public and the authors. Check out their webpage.

This year the project announces an Open call to participate in a creative workshop on the topic of visual storytelling. The workshop is organized in collaboration with Mundo Azul (Germany), Frankfurt Kids (Frankfurt Bookfair), and Pato Lógico publishing house (Portugal).

Important information about the workshop.

Important note: all scholarship recipients will be requested to take part in
the children’s literature festival “Adventures in the Wild”, which will be held in Anykščiai on August 15-16. Participation means giving a workshop or making some other activity on Saturday, August 15.

Remaining 5 participants can be either from Lithuania or any other country. Participation is still free, but you have to cover travel, accommodation and board expenses.

How to apply?
Please send your CV, portfolio and cover letter (max. one page) in English describing your motivation to attend the workshop.
Application documents should be sent to labas@vaikuzeme.lt until July 24, 2020. Selection results will be announced on July 29, 2020.

Mariela Nagle runs the international children’s bookstore and independent
children’s literature project Mundo Azul in Berlin, Germany. The bookstore was founded in 2007, intended to be a meeting point for German and international families searching for alternative children literature and independent publishers along with cultural activities, in different languages. The bookstore is now a wellknown address for illustrators, researchers, publishers and other experts of the sector. She is a consultant and gives seminars and lectures in schools, universities and social- and cultural institutions in Europe, Latin America and Asia. She is specialized on picture books & migration, has co-founded The bilingual Family
association in Berlin in 2011 and has been engaged in different programmes in refugees centres in Berlin since 2015. Mariela Nagle has participated as a jury member at the Bologna Ragazzi Award and the National German Children & Youth Literature Award 2018. She currently works for Frankfurt Kids, the state Museums Berlin and several library projects.

Hendrik Hellige is an editor, art director, designer. Since 2017 Hendrik is the Director of Business Development – Childrenbooks / Visual Arts at Frankfurt Bookfair. For more than 18 years he has been editor and art director of books about visual culture at Gestalten, as well as editor of Little Gestalten / Kleine Gestalten children books. He is also a lecturer at Hamburg University of Applied Sciences and Academy of Illustration and Design in Berlin.

André Letria works as an illustrator since 1992. He won several awards such as the Nami Grand Prix, the Portuguese Illustration Prize twice, or an Award of Excellence for Illustration from the American Society for News Design. His books are published all around the world. He has participated in international exhibitions like the Biennial of Bratislava, the Bologna Fair Illustrators Exhibition, Sarmede or Ilustrarte. He has directed animation films and created theater set designs. He was a juror of several renowned illustration competitions such as the Bologna Digital Award, the Golden Pinwheel Award or the AOI World Illustration Award. In 2010 he founded Pato Lógico, an independent publishing house where he works with writers and illustrators he admires.

See you soon by the river!

Program of the workshop is here.